Over the last five days, I finally walked the streets of NYC, and I kind of “get it.” There’s a strange vibe thrumming all the time. The city is a living, breathing machine. Here are 20 things I learned on my first foray there.

1.Libraries have no books. At least, they have no books for browsing. If you find yourself in NYC and want to inhale the intoxicating scent of thousands and thousands of books, go to a bookstore. If you want a book at the NYC Public Library, you have to go to a designated reading room and request staff to bring your book to you. Oh, but if you love architecture? Soaring ceilings and marble floors? Yes. You can find those! 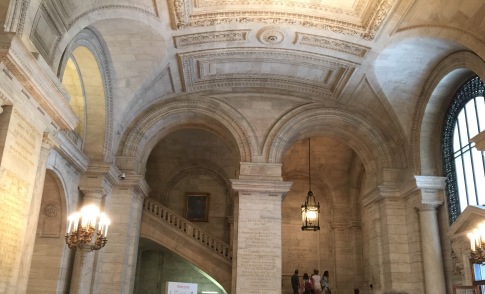 2. Parking is impossible. And when it is possible, it’s oppressively expensive. We saw several parking lots that had portable stands that raised the cars up and down. At these rates, it would cost a person $160 a DAY to park there for work. No wonder everybody uses the subway!

3. Subway=Panic Attack. I couldn’t even walk down the steps. There I was, being all brave with the crowds on the streets, but show me a hole leading into the ground, and I just couldn’t do it. My heart started pounding in my ears, I got dizzy, and my chest felt like an elephant was sitting on it. The thought of boarding an underground train that rocked back and forth, coupled with the odors rising up from those steps, made it physically impossible for me to do it. It’s at times like these that I am sorry my family has to put up with me. Once they realized I was not going to be able to take the subway anywhere, we walked on and figured out another way to get to where we wanted to go: Uber.

4. Uber Cool. An Uber driver took us across to the Battery Park City area, and once we got there, we used our feet. I walked a total of 54, 097 steps (19.72 miles) over our five days in NYC! I’d never been with my husband when he’d called up Uber rides before, so it was fun to see how the app works. We didn’t have to wait more than two or three minutes each time.

5. Weird Food is Normal. I walked past cafes that advertised all sorts of foods that I’m sure are healthy…but I just can’t fathom eating or drinking them. Like this green smoothie with red beans on top:

6. Arugula is hot. New York chefs appear to adore this bitter green stuff in their salads. In fact, several “house” salads I ordered contained arugula and little else. How on earth did someone decide this stuff is food? Note to self: avoid salads next visit.

7. Homeless people are in the landscape. They truly are the faceless and the vulnerable. I saw several as I walked the streets, and I sit here writing these words with shame dripping from my fingertips. I did not engage them. I did not offer to buy them food, which was plentiful, from the vendors on the corners. I treated them in the same way I treated the bags of trash stacked up on the curb: with eyes averted. Ugh! I wish I could turn back the clock and act in love instead of like a typical gawking tourist. When we went to Central Park, I snapped a photo of a person sprawled out on the rocks under the shelter of an umbrella. It wasn’t until I got the photo on my laptop that I realized this woman is probably homeless, and the “pillow” under her head is likely a trash bag filled with possessions. She looks so sad. Why did I just walk by when my heart pulled me to buy a hotdog, to engage in conversation? I have much sin to unearth here, I think.

8. Celebrities among us. Celebs live in NYC in relative obscurity. (Unless they happen to have the last name Clinton…see below).  We saw this guy enjoying a snack and a newspaper in a quiet memorial garden. I’ll leave him unnamed here, for privacy’s sake.

9. My daughter, The Next President? Speaking of celebrities…Secretary Clinton and former President Clinton were in the audience as we watched Hamilton! My daughter the go-getter made her way over and got her photo with Secretary Clinton. Whether you like her political leanings or hate them, it felt very…historical….to be watching a musical about the founding fathers with a presidential candidate and former president in the audience! 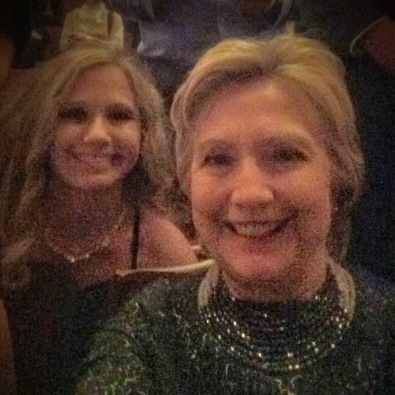 10. Theaters “On Broadway” aren’t. Every block around Times Square had numerous theaters, and each theater carries one show. The theaters are scattered everywhere in the Theater District. This surprised me. For some reason I had the idea in my head of a bunch of theaters lined up and down a street named Broadway and that all theaters carried several different shows at once. We went to two theaters on this trip: The Richard Rodgers Theater for Hamilton, and the Lyceum Theater for Fully Committed. If I had a zillion dollars and more days, I would have gotten tickets to see Wicked, Waitress, Matilda, The Lion King, and more — each in its own theater.

11. No Eye Contact. Don’t look people on the sidewalks in the eye unless you want to carry around a pile of brochures about plays, a bus tour, a boat tour, a restaurant, a comedy club, a party…. Yes. I learned the hard way!

12. Talent is everywhere. We heard a man sing a Whitney Houston song better than Whitney ever did! Check it out here:

13. But Ignore the Naked Cowboys and Painted Ladies. These guys are the hustlers of Time Square’s Pedestrian Flow Zones.  You can’t walk past them without being offered a chance to take a picture with them, for a fee, of course. Elmo and several Disney characters were around, too!

14. Intriguing Architecture. Many of the buildings in New York are ornate and gorgeous! Like this one: 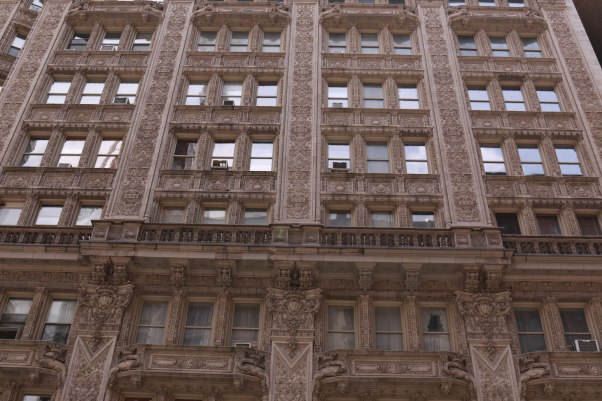 15. A NYC Park is an oasis in a concrete desert. We visited Central Park, Bryant Park, Battery Park and a memorial garden. Every time I spied greenery in the distance, my feet felt lighter and my soul a little happier.

16. 9/11 Memories. Shadows of the Twin Towers hover invisibly over the memorial. Everyone has a story. Our Uber driver lost a friend. We visited the memorial museum on Independence Day, and I’m still processing the collective pain of that day…of how the scenes on television looked like scenes from a movie, not real life. And then to walk those gleaming streets, with beautiful flowers…to see the Freedom Tower, free from the dust and smoke and wreckage that lay everywhere just fifteen years ago…wow. Sorry…I have no words just yet..except, we love you NYC. 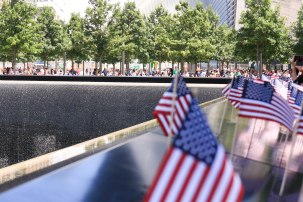 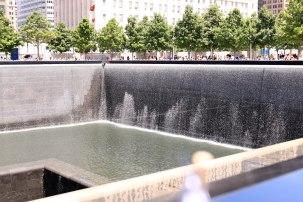 17. Safety First. I walked the streets and I felt safe. NYPD was seemingly everywhere. Maybe it was the holiday weekend, but I was glad to see these guys. Even if some of them did drive these cute little cars!

18. Even Cemeteries Are Closed on Independence Day. We tried to visit Alexander Hamilton’s gravesite at Trinity Church, but the gates were locked up tight. I was able to grab this shot, though, through the wrought-iron fence. I wonder what he would have thought about 9/11 and the Freedom Tower? 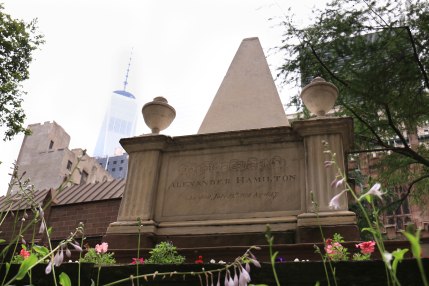 19. NYC Fireworks BOOM! We walked down to the East River (a little over a mile away from our hotel) to catch the Macy’s fireworks. When we were about a block away, the show began, and we heard them before we could see them. Unless you get to the river where there are no more buildings, you can’t see anything. So we joined in with the locals and caught a small view of the show behind the UN building. It was a great ending to a moving day.

20. Finally, Brutal Honesty. The people we met were nothing if not honest. Here’s my favorite sign, and a symbol of what it means to be in New York: 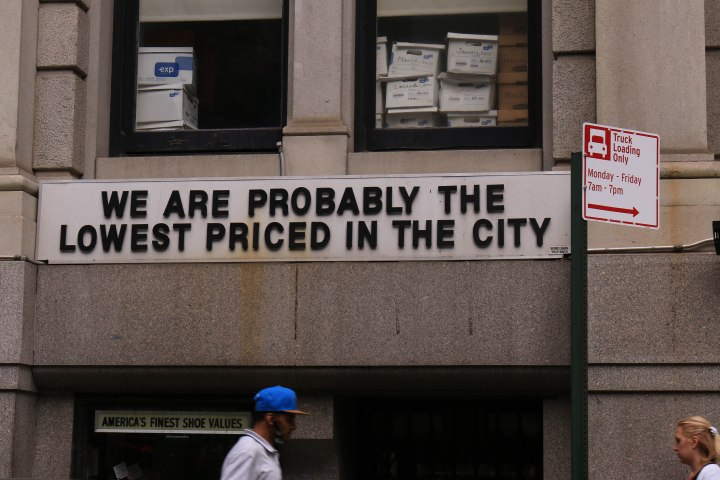 Haha! Until next time, New York! I wonder what else you have to teach me?