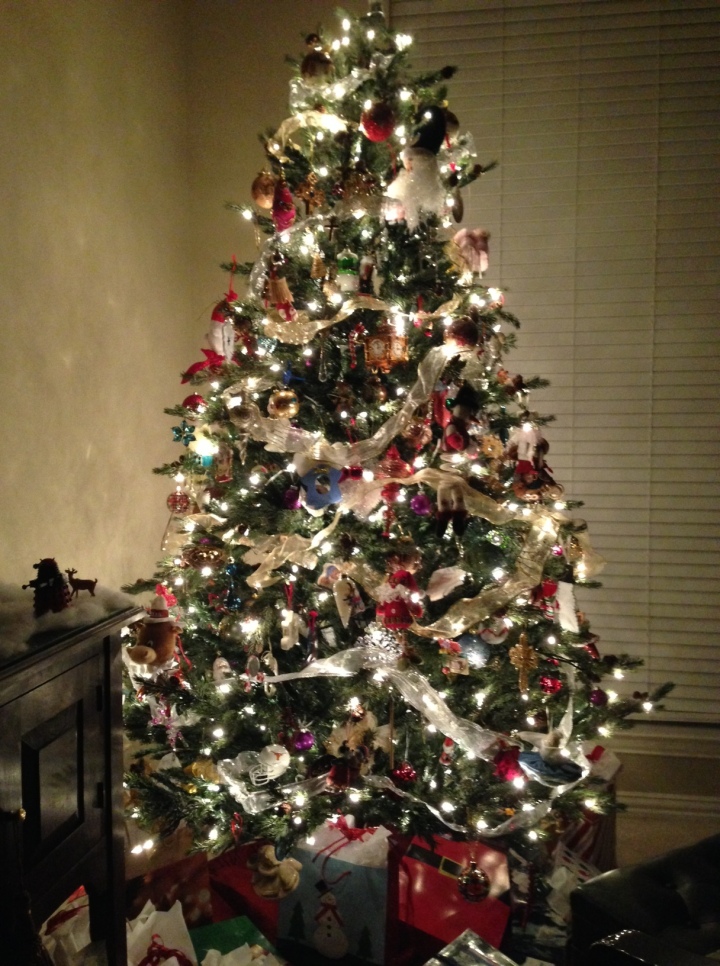 I don’t know that I want to be known as a “Christian” anymore.  I don’t want to be part of a culture better known for scorn than for love.  The Jesus that I know, the one whose words are etched red across the pages of my Bible, shared love and mercy to sinners and saved his scorn for those who thought they were “better than.”

I’ve been part of the Christian “better than” crowd, and I’m pretty much done with all that finger pointing and yelling about Christian “rights” and all the screaming about sins because I realize that I am just one decision away from eternal hell myself.  If not for Jesus, I’d be sorted into a big old pile of goats at the End of Days.  As someone who daily struggles to die to self, I’m slowly realizing that I don’t really have any “rights” as the Declaration of Independence and U.S. Constitution defines them.  I left those rights at the foot of the cross the day I decided to follow Jesus.

Do I have free speech?  Under the law of our country, I am free to speak my mind.  Yet under the grace of Christ, I am compelled to speak love.  Do I have the right to carry a firearm? Under Texas law, I certainly do claim that right.  But under Christ, I am taught to turn the other cheek and to follow him.  Did Jesus take up arms when he stumbled to Golgotha to die on a cross? Instead of inciting the crowd to violence, he gave up his life in order to be the Salvation of souls rather than the kingly rebel many of his followers wanted him to be. If I truly follow Jesus, then I will have my own cross and bitter cup to bear, whether I carry a firearm or not. Do I have the right to the pursuit of happiness? Under the law, I do — but under Christ, I press on towards a joy that can’t be found anywhere on earth.

I’ve been walking a journey these past few months — my blogs have been few, yet my thoughts and prayers have been deep. I have seen the enemy, and he is me.

He’s the one who spends more time agonizing about abortion and less time donating time and treasure to orphanages. He’s the one who cringes at the culture that legalizes unions that God has said are immoral and turn a blind eye to the immorality of those who co-habitate outside of marriage.  He’s the one who criminalizes the desperate thief yet demonizes government handouts.

I’m not saying that the enemy inside me is wrong to worry about abortion or same sex marriage or thievery or fraud.  What’s wrong is allowing the enemy to think he can fix it when in reality the only One who can fix the problems is God.   We can’t legislate clean hearts. We can’t make someone with a twisted view of right and wrong come around to our way of thinking any more than they can make us come around to theirs.

But God is the one who searches our hearts, and his Holy Spirit is the one who breathes the breath of life in us, who spurs us to repentance, who inspires us to extend open hands rather than closed fists.  We make a huge mess when we think that preaching and wagging fingers and waging social media wars will convince anyone that Jesus is the way.  We act like we are the ones who can fix the culture we are in, as if we are gods or fairies or wizards able to change someone’s mind by raising the volume of our voices.

In this way, Christianity has taken a huge step backwards and has lost much credibility.  Who is going to believe the Good News of Jesus when we wrap it in heavy layers of contempt?  Does God need our contempt to reach those hearts he’s going to reach?

So you know what?  If you are a gay person or a person living with someone out of wedlock or a drug addict or a stay-at-home mom who yells at her kids more than she should — hear this: Jesus came to save all people.  Especially you.  I’m not going to preach to you about how you can’t play in the church band because you aren’t yet “saved” or about how your lifestyle offends God because really, God is so holy that everyone’s lifestyle offends him.  We can’t be good enough.  When you come to know Christ, He will send you his Holy Spirit, and that’s when your heart will start making weird choices.  You’ll decide to wear a tank top under that shirt not because someone told you that your shirt was too low-cut but because the Holy Spirit led you towards modesty.  You’ll open up the Bible and get to know Jesus because you WANT to know how to harness that kind of sold out love for others — the kind that spills over and spreads joy.  When you open your mouth to yell at your kids, you’ll stop, take a deep breath, and start over because the Holy Spirit will nudge you.  Sometimes you’ll ignore that prompting that compels you to A, B, or C — and you’ll fall flat on your face in the mud.  But Grace says Come to Me, Weary and Burdened Soul, and I Will Give You Rest.  And you’ll remember that Jesus’ burden for us is no burden at all.  So you’ll wipe the mud off your face, confess you missed the mark, and get back up on the trail.  But those who come to Jesus do so out of Grace, not because somebody wagged a finger in their faces and condemned them to hell.

But don’t just take my word for it.  Look at what Jesus says about what we are to do in order to bring the Good News:

18 Jesus came and told his disciples, “I have been given all authority in heaven and on earth.19 Therefore, go and make disciples of all the nations, baptizing them in the name of the Father and the Son and the Holy Spirit. 20 Teach these new disciples to obey all the commands I have given you. And be sure of this: I am with you always, even to the end of the age.” (Matthew 28:18-20)

I am a teacher, through and through.  I even teach in my sleep through my dreams. I teach my dogs, I teach myself, I teach my daughter. So I zeroed in on the word “teach” in verse 20.  In the Greek, the word is didaskō, and it means to instruct.  It’s used repeatedly of Jesus as he walked and taught.

Which makes me think: what kind of teacher was Jesus?  Certainly not boring.  Interesting, engaging, funny, and witty are all words that the world might not immediately associate with Jesus — but he was all of those adjectives, and more.  When confronted with a clear sinner, an adulteress, he forgave her and told her to go and sin no more.  When confronted with a bunch of religious celebrities who prided themselves on being righteous, he called them a Brood of Vipers.  The four gospels are filled with didaskōs from him, but all of the things that he taught us — loving our neighbors, turning the other cheek, taking care of disagreements quickly, praying in secret, etc. — naturally come about in our actions when we love him.

The translation above says we are to teach these new disciples “to obey” the commandments Jesus has given us.  The Greek word used doesn’t really mean obey.  The Greek verb is tēreō, and it means to take care of, or to attend to carefully. There’s a whole world of difference between obeying a command and attending to a command, isn’t there?  I can obey all I want and still have a disgruntled heart.  But when I attend to something, that implies that the command I attend to or guard is something that I desire rather than a burden I resent.

And there’s the secret — when we encounter Jesus the Son of God, we are CHANGED from the inside out so that those commands become second nature.  Nobody else has to point out our sins to us because the Holy Spirit transforms us.  When we’re grafted onto the Vine, we don’t have to DO anything except let the sun shine on us and the sap flow through us.  The blooming we do doesn’t come from us but from Jesus, the true Vine — the roots, the branches, the sap, the leaves, and the fruit.

20 When I am raised to life again, you will know that I am in my Father, and you are in me, and I am in you. 21 Those who accept my commandments and obey them are the ones who love me. And because they love me, my Father will love them. And I will love them and reveal myself to each of them.” (John 14)

Jesus is in the Father.  I am in Jesus. Jesus is in me.  If I draw a Venn Diagram (told you I’m a teacher!), this is what that relationship looks like: 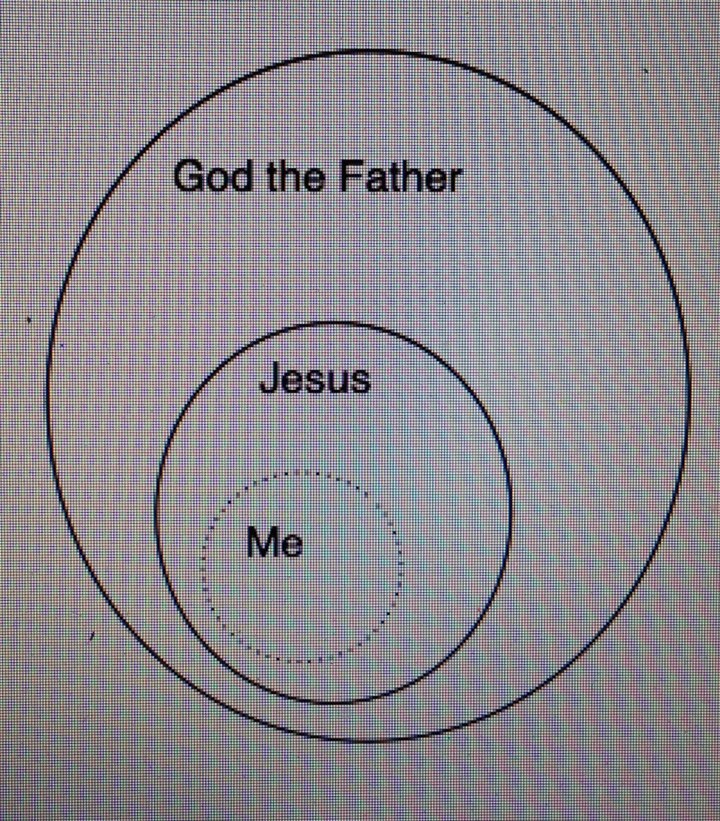 This past week was one in which I forgot my relationship to the Vine.  I kept trying to make my flowers bloom and my grapes grow, all in my own power.  To be sure the week was packed full to the brim with Christmas parties and family gatherings, yet my spirit and my body suffered.  One night I was so drained that my body trembled as if in the throes of a panic attack, and sleep was a long time coming as I lay there in bed and forgot to pray.

“Abide in me,” Jesus says.  I don’t have to beat myself raw with internal accusations of not doing enough to help the poor, or not making enough fudge, or not XYZ.  I don’t have to work myself into a frenzy when the news media reports on another “attack on Christmas” because that Amazing, Supernatural thing that God did when he sent Jesus?  Nobody can steal that away from me.  Sure, they can steal the Baby Jesus statue from the church’s nativity scene, but those thieves can’t steal away God’s love, even from themselves.

“Abide in me” looks a lot different than “protest at funerals of servicemen,” and “troll liberal blogs, spewing death and damnation,” and it certainly looks a lot different than “Jesus is a Republican.”  To think this is true is to deny that Jesus came to save the lost.  He came for those who need The Physician.  A verse that most who claim to be Christians memorize is John 3:16.  This Christmas, I hope we who follow Jesus will take a fresh look at this verse and what it means for us.

16 For God so loved the world that he gave his one and only Son, that whoever believes in him shall not perish but have eternal life. (John 3:16)

There are no qualifications placed on God’s love.  If you live in the world, then know that God loves you.  He gave you Jesus.  Unwrap THAT present, and you’ll never be the same.