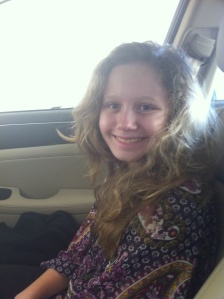 Each day that passes, I grow more and more aware of how quickly my little girl is growing up.  We will celebrate her twelfth birthday soon — I am both thrilled and forlorn at the passage of time.

The doctor gave me a different electrode configuration for my pain today, and it seemed to work.  Either that, or the pain is passing anyway.  So I was able to get up off the heating pad and help my daughter get ready for her acting debut.  Tonight she will be portraying Queen Esther in a performance at church — a role for which she’s been rehearsing faithfully.  She is truly a natural, and I say that not just as a mom but as a mom who has been in a few plays herself.

So this afternoon I curled her hair, brushed blush on her cheeks, used a dab of mascara and lipstick…and WOW!  My little girl is transformed into a young woman.  She confessed that she likes it when I color in her eyebrows and put on a little mascara…it won’t be long before she starts asking to make herself up all the time, not just for a role in a musical.

She also hugged me and told me that she thinks I am the best mother in the world.  I know that isn’t true, but at least for that moment, it was true to HER.  And that, my friends, is what life is all about.

There’s something special and amazing in the bond of a mom and her child.  The knowledge that I belong to her in the way that no one else on earth ever could, and that she belongs to me in a way that no one can, is fragrant with love, like a sweet-smelling batch of fresh-baked cinnamon buns.  Frighteningly, she knows me perhaps better than I know myself.  She shows me through her own actions and reactions what she has learned from me — the good, the bad, and the ugly.

She is obedient and is not prone to peer pressure.  On Halloween this year, she detached herself from her pack of friends and walked home alone because they chose to trick-or-treat down a street she believed I had told her was off limits.

Her intelligent wit amazes me every day.  I love the way she imagines scenarios to get characters out of rough situations, both in books and in movies. I’m thrilled to share the excitement of books with her.  Even if I don’t ever work up the nerve to fly away to Europe with her, we can travel to exotic places together through shared books.

Tonight will be special, no matter what happens, because she is my girl.  She will be in the spotlight and will shine for the Lord.  As her mother, I will quietly soak it all in with thanksgiving, because I know in my heart that she is the BEST daughter in the world…for me.