Today was scheduled to be one of those warm and fuzzy family-friendly days, complete with a grinning teenage ice skater, smiley trips to art museums, a fabulous dining experience, and a leisurely late afternoon spent reading novels and eating oatmeal cookies.  The reality was a bit different.

Let me back up a bit and tell you a little something about last night.  My handy, eagle-eyed hubby noticed that water was on the floor near the refrigerator. My hubby notices with 100% accuracy when anything in the house is out of a place in a way that may cause someone to fall, put their eyes out, or both, so I wasn’t surprised that he was the one who noticed the slick spot.  My mom brain easily overlooks such things because…well, because it has hubby to take up the slack!

Both of us assumed that someone (ahem, not me, because I was out on a girl’s night at the coffee house) at the house dispensed and spilled a piece of ice that fell on the floor and melted.  We wiped up the drip and went to bed.

The first thing I noticed that was off was a strange odor in the refrigerator.  It smelled like nasty soy sauce.  I couldn’t find any open containers of food but just shrugged it off as one of those unexplained mysteries.

(I have to insert here the fact that it was 7 a.m. in the morning.  I do not normally rise and shine at that hour, especially lately since I’ve been wresting with my restless legs six or seven times a night.  But we had a fun day planned, so I was up and at ’em, but I wasn’t exactly firing on all cylinders.)

I opened the bacon and got it cooking in the microwave.  That’s when my fuzzy brain saw the new puddle-sized slick spot on the floor.  With dread in the pit of my stomach, I noticed a steady drip of water falling off the bottom of the freezer onto the floor.

Suddenly, I had the feeling that I really didn’t WANT to open up the freezer to find the source of the puddle…but I opened it anyway to find my worst fears confirmed.  The stinky soy sauce smell was overwhelming.  The ice in the dispenser was melting.  The ice cream was oozing. And — horror of horrors — the Eggos were soft!

At that point I noticed what my fuzzy morning brain hadn’t: the silence.  I opened the refrigerator and noticed something else: it, too, was disturbingly warm and silent.  Room temperature.

Thankfully we had not yet eaten any of the food.

So…our leisurely morning had turned into an adventure, and it wasn’t even 7:30 yet!

We took our teenager to the ice rink and may have coaxed a grin or two out of her very sleepy eyes.  We also made the museum rounds: the Ft. Worth Modern Art Museum and the Kimbell Museum of Art — field trips in which I learned quite a few new tidbits of information:

The “modern” art museum in Ft. Worth is actually the oldest museum in Texas.  “Art” is a relative term.  Hence, this glass cube of…air. 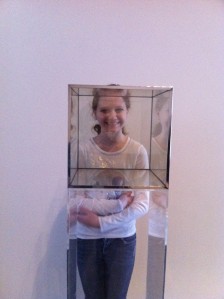 Some collections at the museum are not to be photographed.  Of course the rule follower in me was mortified when the museum watcher told me photography was not allowed as I was attempting to snap a photo of this…thing.

But not until I actually got the shot!  What on earth IS it?

I also learned that Frodo was at the top of this ladder:

Not really.  But the long ladder reminded me of the stairs he had to climb to get to the secret entrance into Mordor.

I also learned that taking photographs with an iPhone on a sunny day outside leaves the subject in shadow.  But since it’s a cool picture anyway, I’ll share it:

Another lesson I learned is that I am not 100% yet.  After an hour of perusing the echoey exhibits, my lower back protested mightily.  But we still had the Caravaggio exhibit to see at the Kimbell — and I had so much more to learn:

People who wish to see a special exhibit at the Kimbell Museum would do well to arrive early.  The line to get in snaked outside the building.  People who do not like standing in long lines would do well to purchase a membership.  The ticket box had three people serving a very short members line and one person serving a very long general admission line.  (We are now proud members after I accidentally got into the wrong line but then used it to my advantage and purchased a membership!)

And then…Caravaggio.  When hubby went to Rome a couple years ago, he came back raving about Caravaggio.  Caravaggio was to art like Steve Jobs was to technology.  Everything changed after Caravaggio, who was the first to use light and shadows to make his art “pop.”  And POP it did — some of the people in his paintings looked like they were about to step off the canvas and into the exhibit hall.  His art was a sensation in his time, and in ours.

Caravaggio brought humor and art together.  We all enjoyed finding the sleight of hand antics portrayed in his paintings: the gypsy sliding the ring off the young man’s finger…the card shark hiding cards behind his back.

We also examined portraits of saints — a topic in which we Baptists are not exactly well-versed. Apparently St. Frances of Assisi had some sort of heavenly encounter and ended up with stigmata (unexplained wounds on his hands, feet, and chest). Being raised Protestant, I have never heard of this story and am intrigued.  Thus, this trip to the library will lead to more research on my part as I try to learn more about this event — are there historical references to it?  Is it legend?  Is it truth?

Finally…those of us who are Protestant raised might not have ever heard of a woman named Judith…but Caravaggio and his contemporaries were very familiar with her story.  The Book of Judith is included in the Eastern Orthodox Bible but was eliminated from the Protestant one.   Many sites I’ve come across say that Judith had too many historical inaccuracies, but others claim that if Judith is dated to the time during the Judges, the historical facts align with what is known about Israelite history.  Suffice it to say that the paintings of Judith that I saw today made me decide to read her book.

After a quick detour to view Michaelangelo’s earliest known painting, we drove towards home, sat in Six Flags traffic for fourteen hours, cleaned up the lonely dog’s pee, went to Lowe’s to purchase a new refrigerator, and dropped by the grocery store to buy a few items we needed for tomorrow’s breakfast.  Thankfully we had a tiny bit of room in the small refrigerator we keep drinks in, or else we’d be living out of a cooler for a week until the new refrigerator is delivered.

Hubby then dumped everything out of the smelly refrigerator into trash bags and took them to the nice salesman at Lowe’s who helped him smuggle the slightly spoiled food into the dumpsters.  Because you know YESTERDAY was trash day.  Of course.

It’s been a looooooooooonnnnnnggggg day.  My eyelids feel gritty, my back is barking, and my heart is hurting at all the food we had to throw away…yet I am grateful for this day of learning and family togetherness.  I am grateful we were able to purchase a new refrigerator AND get rid of all the stinky soy sauced food.  And I’m grateful for museums that inspire learning….even in a fuzzy-headed, sleep-deprived, KitchenAid refrigerator-hating mom like me.