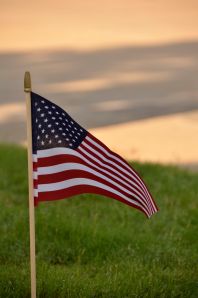 On this Independence day, I’ve been pondering the current course of our great nation.  I am a proud American, blessed and honored to live in a country where I may freely worship the Lord without threat to my life, my liberty, or my property. I am free to educate my child in the way I see fit — state officials are not breaking down the door as is the case of our homeschooling brothers and sisters in Germany and other nations.

Yet there are many liberties I once had that are mine no longer. A slow creep of governmental authority has crept over all our lives without our even being aware.  Take, for example, the reality of property taxes.  On a recent visit to China, my husband remarked to a Chinese friend his surprise that in China, the government owns the land on which houses and other properties stand.  His Chinese friend laughed — LAUGHED — and said,

Indeed. If we owe an annual tax on our property, and if we then lose our property for nonpayment of taxes, who actually owns the property?

It’s a situation worth pondering.

I am no constitutional scholar, although I play one on TV. (Not really!) But it seems to me that our elected officials recently enacted, according to the Supreme Court’s majority opinion, a tax on breathing.  If you are alive and elect to not have health insurance, then you are taxed.

I wonder what the writers of our own Declaration of Independence would say about a tax on breathing?  Since they aren’t around anymore to ask, I’ll just take a look at what they wrote in the beginning paragraphs of their Declaration:

“We hold these Truths to be self-evident, that all Men are created equal, that they are endowed by their CREATOR with certain unalienable Rights, that among these are Life, Liberty and the Pursuit of Happiness. — That to secure these Rights, Governments are instituted among Men, deriving their just Powers from the Consent of the Governed, that whenever any Form of Government becomes destructive of these Ends, it is the Right of the People to alter or to abolish it, and to institute new Government, laying its foundation on such Principles, and organizing its Powers in such Form, as to them shall seem most likely to effect their Safety and Happiness.

There are some who would argue that property taxes such as ours and this new breath tax — as well as all the other thousands of taxes and fees we pay without knowing what they are really for or whether they are being used properly (have you ever looked at your phone bill?) — these governmental intrusions are restricting our right to life, liberty, and the pursuit of happiness.  Those who must pay the government “rent” (i.e. taxes) on property they supposedly own are not truly at liberty, are they?

Which brings me to my next point.  I’ve written before that I am neither a Republican nor a Democrat. In this year’s presidential election, I find both major candidates lacking in the qualities I wish to see in a leader. I find that members of both major political parties are so busy pointing fingers and stonewalling each other that absolutely nothing consequential gets done. The cogs of our federal government machine are clogged with windbags who pontificate about everything yet actually do nothing.

So this afternoon I decided to see who else would be on the ballot on election day this November.  I found to my surprise that former New Mexico Governor Gary Johnson is running for president as the Libertarian candidate. I watched a few YouTube videos and read through his website, and I have to say that I really like his message.

Truly, I just cannot bring myself to vote for a man who flips so much he’s like a fish out of water, flopping around on the shore.  Governor Romney doesn’t seem to know where he stands on any issue.  He’s just out to get votes.

For example, many Republicans jumped on the “Obamacare is a tax!” bandwagon immediately after the Supreme Court’s majority ruling…but then Romney’s campaign came out and said that he thinks the payment is a penalty and not a tax. Then Romney “clarified” his position on the issue and said that the Supreme Court’s majority ruling stands, but personally he considers it to be a penalty.  The FoxNews story remarks,

Romney’s comments Wednesday in fact mark the second time in three days that the campaign has attempted to clarify its position.

This kind of wishy washy response is precisely why I don’t think I can hold my nose and vote for him.

I haven’t decided yet what I will do on election day.  But I did like this video from the Gary Johnson campaign:

On that note, it’s time to go cook out and enjoy the rest of this gorgeous day the Lord has made.  Happy Independence Day!