I have a major decision to make.

Today an ultrasound revealed that I have adenomyosis, a diagnosis that was suspected but not confirmed until the imaging today.  As I understand it, adenomyosis is a condition in which the lining of the uterus begins invading the muscle of the uterine wall. When the body’s hormones signal this lining to shed, it sheds everywhere, including within the muscle wall.  This process causes intense pain and inflammation.  Finally I now understand why every month I feel as if I am giving birth all over again. 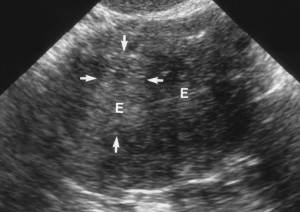 Although this image is not from me, it depicts what I saw today on the screen in the doctor’s office.  He highlighted several shiny, streaky areas just like the one shown above.

At least I now have a diagnosis for my severe pain and possibly a reason for the chronic low back pain I’ve been experiencing. But what to do about it is the hurdle that I am having a difficult time facing.  According to the doctor, and according to everything I’ve read online (and I’ve read a lot), the only treatment for adenomyosis is hysterectomy.

The other option is to live with the pain until menopause.

What if I don’t like those choices?  What else is there for me?  I found a clinic in California that performs surgery to remove only those parts of the uterus that are diseased and then sews it all back together.

Maybe I should find an Eastern doctor to see what he would prescribe, if anything, to help me through this.  If I can get through the next ten years or so without being in agony and still keep all the body parts I was born with, I’d choose that option.  Yet even as I write this post, pain is consuming me.  It radiates outward from the center of my lower back and spreads out to my hips and my pelvic region.  It feels as if a giant has taken a wrench, pinched a segment of my lower back, and squeezed it mercilessly. It comes in wave after wave after wave until I can no longer concentrate.  I fidget and change positions over and over again, trying to find a comfortable place to rest.  The only thing I can take for pain is Tylenol.  It dulls the pain but then the effect wears off long before I am due to take another dose.  So I roll on the Icy Hot and sandwich myself in heating pads.

Can I endure another 120 months of not being able to function?

This pain is compounded by the fibromyalgia pain that always comes on the heels of this severe back pain.  I ache all over and feel as if I’ve been run over by a semi truck.

It makes me wonder: if I remove my uterus, will my fibromyalgia symptoms improve as well since I wouldn’t have this debilitating pain every month?

The doctor joked with me today that if he could wave a magic wand and take away my uterus, I would be symptom free.  I laughed…but he has a point, at least to some degree.  The other side of me argues that God gave me all my body parts for a reason.  Although I am finished having children…is it okay to remove something that God put there?

Before you say it or comment…I know it is okay because it is a body part that is diseased.  It would be just like a doctor performing surgery to remove a gallbladder that is causing acute pain.  God gave us gallbladders, too.

At the back of my mind through all this is the big F word.  That’s right: FEAR.  I am afraid of surgery.  Not just nervous, but flat out, freaked out at the thought of surgery and the aftermath.  I can’t imagine having a major surgery like a hysterectomy and coming through it without experiencing nausea — my worst fear.  Most people would be afraid of dying on the operating table.  Me?  I’d rather die on the table than wake up to nausea.  Literally.

I’m walking along a bumpy road filled with pain.  Ahead of me is a fork.  If I walk to the left, I’ll continue along this same path, dealing with the pain as it comes.  If I choose the right, I risk walking through the Nausea corridor…but once I’m through that obstacle, I have a life without pain. It seems like a simple choice to all of you, I’m sure.  But you aren’t me. You probably don’t have debilitating panic attacks when a friend of a friend you’ve just been around has a stomach virus.  Your mind doesn’t obsess about whether or not the chef washed his hands.  You probably eat all the salad you like instead of avoiding it all due to the minuscule risk that raw vegetables could be contaminated with salmonella.

I’m David facing Goliath. Can I do it?  Not on my own power: I need the Lord to pick me up and carry me if He wants me to go down that fork in the road.  I have no doubt that HE can walk that path — but me?

Ever wish the Lord’s power came in pills or even cans of spinach?  Wouldn’t it be great to just swallow some spiritual spinach to make our spiritual muscles pop out?  Before you say it, I know, I know.  It’s accessible. It’s in the Word of God.  I’ve read it.  I’ve felt its power in worship.  I’ve been in scary situations when I know the Lord just took over for me and I just acted without thinking.

But this is different in that choosing a hysterectomy would mean I am willingly walking into the scariest situation I could ever imagine — by choice!

Pray for me, warriors.  Pray that I will have courage and determination and unwavering faith.  I wouldn’t mind at all if you prayed that I would indeed find a source of spiritual “spinach” that would make me mighty like Popeye, wise like Solomon, and brave enough to face the giant, like David.