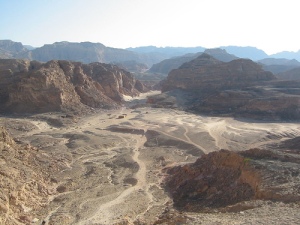 I’ve never been to a “real” desert, but the images I’ve seen in books and media — and the way I’ve been whining so much about this Texas drought and 70 100+ degree days this year — convince me that I probably wouldn’t like it that much, especially if I had to travel through it on foot.

Gritty sand sticking to the sweat between my toes? Yuck!  Searing heat with no prospect of shade? I’d be burned to a crisp in no time. I’ve been thinking lately about the desert, though, because I believe God is beckoning me on a journey I really would rather not take.

There are some interesting parallels between the story of the Exodus and my story — and probably yours as well.  All of us are enslaved or are trying to break free of something — whether it is poverty, or a bad job, or no job, or childlessness, or loneliness, or illness or addiction or unhealthy relationships.  The ancient Hebrews had been emancipated through miraculous means after 400 years of slavery in Egypt.  God promised to give them a land of their own, a land “flowing with milk and honey.”

But instead of taking the people due east — the most direct route possible to the honey-and-milk paradise from Egypt, God did something strange. He took the people south…through the heart of the desert.

What do we say when things aren’t going well for us today?  Here in Texas we like to say that life just started “going south” pretty fast.  The earthquakes, the floods, the droughts, the politicians, the national poverty rate, the unemployment statistics…it’s all going south, isn’t it?

Why did God not chose the most direct path?  Exodus 3:17 tells us a bit of the back story:

17 When Pharaoh finally let the people go, God did not lead them along the main road that runs through Philistine territory, even though that was the shortest route to the Promised Land. God said, “If the people are faced with a battle, they might change their minds and return to Egypt.” 18 So God led them in a roundabout way through the wilderness toward the Red Sea.[c]

For the last two to three years, I have been on a health journey of my own.  I’ve prayed and asked Jesus to heal me.  There is no doubt in my mind that He has the power to do so…he conquered the grave, after all.  And the New Testament is full of stories of Jesus healing many people — some, like the woman who had the bleeding problem for twelve years, just touched his clothes and were healed.  So when my doctor trotted out the idea of a hysterectomy a couple of years ago, I was so offended that I left his practice and got a second opinion. And a third. And now a fourth.  It’s as if God is herding me….well…to the south, towards surgery.

Speaking of herding, God did an amazing job protecting the millions of Hebrews in the desert where he had them wander around for forty years.  He gave them the ultimate GPS system in the form of himself as a giant pillar of cloud by day and a pillar of fire by night.  Practically, don’t you think the God-cloud would have shielded them from the desert sun and the fire would have warmed them in the cold nights?

This leads me to think that God fully plans to send me my own personal pillars of clouds and fire to help me walk through this desert towards healing.  He’s already been gently doing so these past two years as He continues to place people in my path who have had their own hysterectomies, and their testimonies about their experiences have all been positive.  The final puzzle “peace” came to me this week when my doctor’s nurse was out sick and her replacement nurse, who only works two days out of every six months, shared with me (out of the blue!) about her own experience with hysterectomy.  What are the odds that she would be there on the same day I happened to be there?

So I have decided to go full speed ahead.  I’ve scheduled two appointments with surgeons to discuss surgery and will be praying for wisdom in selecting the one God has chosen for me.  As I feel fear well up inside me, it helps to list out the facts:

For awhile before I knew for sure that I had adenomyosis, I prayed and told God that I would have surgery if I only knew for sure that I needed it.  He led me to an internist, who sent me to a different gynocologist who used a special sonogram procedure to identify my problem.  Finally, I know what’s been plaguing me these past few years.  And I did make a promise, didn’t I?
Ina way, God has already moved me to the desert.  While I am here, He will not abandon or forsake me.  He will take my hand and lead me through to the other side…to the land flowing with health and vibrancy and energy.  He will take me through this crushing anxiety. As surely as I trust gravity to keep my feet on the ground, I will trust the Lord to set my medical plans in place as He intends them, from the doctor selection to the hospital selection, to the anesthesiologist and nurses, the surgery itself, the help that will come later from family and friends…all these things I resolve to give over to God.  Surely the One who created the universe can oversee every detail about my upcoming surgery, even the ones I don’t even know about.
I’m filled with anticipation at the wonder God is about to do in and through me.  I’ve gone from severe anxiety and dragging my feet about a simple outpatient procedure to a decision to have major inpatient surgery.  I still have anxiety, but you people must be praying for me because I also have His peace!  I’m getting my “Spiritual Spinach” by dwelling on these words from Deuteronomy 31:

It is the Lord who goes before you. He will be with you; he will not leave you or forsake you. Do not fear or be dismayed.

One day soon that will be me, embracing my own personal Promised Land.  And I will sing Blessed Be Your Name as I’m herded through this desert place until I get to the other side.

One thought on “Getting to the Other Side”