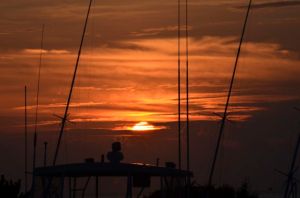 Last week was full of breathtaking moments as my family and I embarked on a journey to Hatteras, North Carolina, on the southernmost tip of the Outer Banks…accessible by car, that is.

What a journey it was! First came the air travel and the obligatory panic attack.  I’m so used to panic attacks at airports that you’d think by now I could ignore them completely.  Nope.  The anxiety and agitation reached a peak, and my poor husband just didn’t know what to do with the blubbering mass of (quiet) hysterics that had become his wife.  I inhaled Young Living’s “Peace and Calming” blend, swallowed a bottle of Rescue Remedy and downed a Dramamine. I really, really, really did NOT want to get on the plane.  Walking down the jetway felt a bit like walking the plank.  You know those nightmares where the hallway just keeps getting longer and longer, and your feet are heavy and you can’t move them but you know you have to keep going?  That was me.

When I got on the plane, I began chain-chewing gum (to help with motion sickness and anxiety) and stuck in my earplugs.  At that point I entered my very own Cone of Silence.  This was my first flight with earplugs.  I highly recommend them for anxious flyers.  The quiet murmur I heard through the earplugs helped me relax.

Until the stomach cramps hit. Whatever nebulous thing that is wrong with me rears its ugly head way up in the skies.  Ugh.  The stomach pain is almost unbearable, and it strikes with precision every time I fly.  Maybe it has something to do with changes in air pressure?  I’m thinking one day my insides are going to rupture.

But not on this trip!  Three hours later, we safely landed at Norfolk and began what we thought would be a three hour drive to the outer reaches of the Outer Banks. 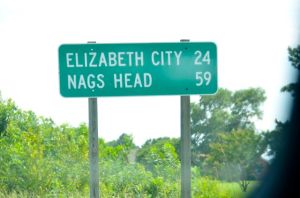 Apparently a million other tourists descended on the Outer Banks at the exact same time as we did. 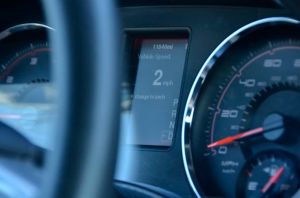 We crawled along at 2mph for hours and hours.  Literally.  It took us over three hours to travel a paltry ten miles.  I entertained myself by taking photos of the scenery… 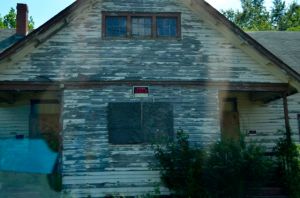 …like this house for sale.  It looks to be a real fixer-upper!  A distinct drawback, though, would be the snarl of traffic that stretched in front of the yard for miles and miles on Saturday afternoons. 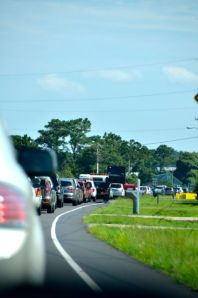 At least the billboards were entertaining.  The grammar nerd in me spotted the mistake on this one right away.  Can you? 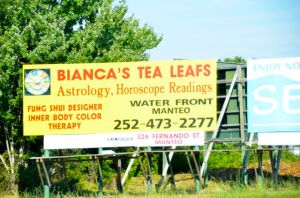 My niece rode in the car with us.  We had a great time visiting and comparing our trip to the locusts, water-into-blood, and plagues of Egypt. 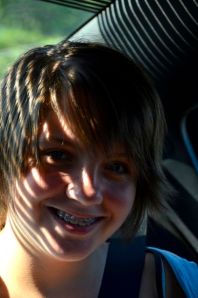 Finally, after SEVEN hours in the car, we reached the northern end of the beach, and I fell head over heels in love with the sand dunes. 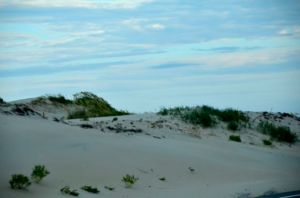 Or maybe it was exhilaration at the thought of just one more hour of driving until we reached Hattaras.  The pain in my stomach had reached post-surgery proportions. Fortunately, I felt better the next morning.  Sea breezes tend to mend much! 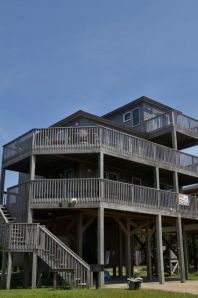 This lovely seaside cottage was appropriately named Grandview.  There were three bedrooms on the first “real” level, a living room and kitchen on the second, and a fourth bedroom up top. 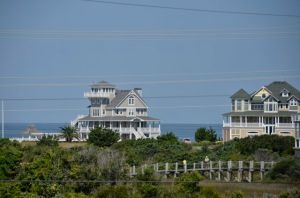 We could see the sound, the Atlantic, and the island from the deck.  The view was indeed Grand!

A few steps away from us, at the literal end of the road (the only way to get farther south was to take a ferry) was the Graveyard of the Atlantic Museum.  Many ships have been lost just off the shores of the Outer Banks, and this museum told the stories and displayed artifacts from some of them, including Blackbeard’s Queen Anne’s Revenge. 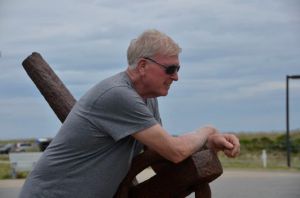 My father-in-law, a retired Navy captain, knew much of the history and added details of his own.  For example, we learned that those in the Navy refer to the Coast Guard as “knee deep sailors.”  I told Papa that we needed a picture of him standing at anchor.  I call it, “Captain and Anchorman.” 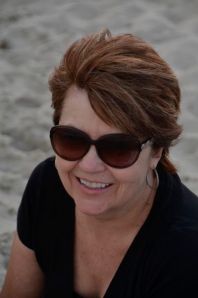 We spent many hours lolling on the beach, enjoying family, sunshine, sea breezes and life.  Here’s a picture of one of my two lovely mother-in-laws. I would write “step-mother-in-law,” but that sounds too stuffy. I am fortunate to have three moms to love. 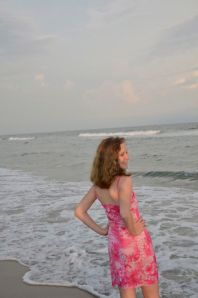 My daughter took a walk on the beach nearly every night.  We discovered that the beaches of Hattaras differ from those of Florida in that the water is FREEZING, there are no palm trees, sand dunes and sea grasses are everywhere, and jellyfish are not as plentiful.

My husband’s cousin and his daughter joined us for part of the week.  I took about a zillion photos of her frolicking in the waves. Her joy was contagious! 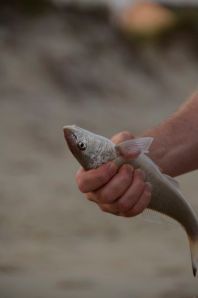 And here is one of the fish that the guys caught right off shore.  He/she/it looks a bit nervous.  No worries, though.  The guys threw it back. 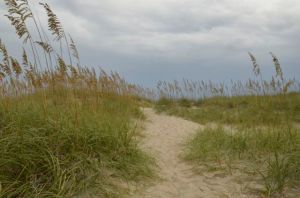 Paths to and from the beach snaked around and through the sand dunes.  I confess a few times I took the wrong path and ended up exiting through someone else’s garage! 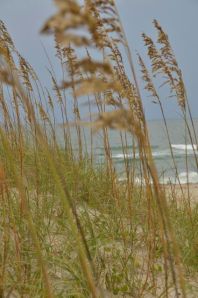 If the sand under my feet had not been so blistering hot, I could have dazed at at this scene for hours.  Instead I hopped around on hot feet and snapped this photo quickly before scurrying to the cooler sand near the water. 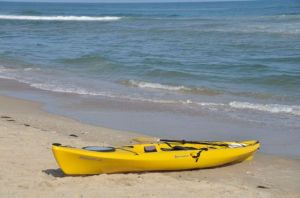 Two other cousin families in our group stayed down the road from us.  One of my husband’s cousins rented kayaks for a little ocean cruising. 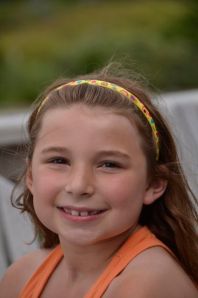 What a doll!  I took oodles of photos of this precious cousin and heard tales all about her trials with her little sister.  We decided that what happens in Hatteras, stays in Hatteras!

Our last day we spent time perusing souvenir shops and a funky collection of shops on the Sound side. 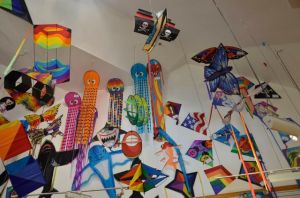 I loved the atmosphere at Kitty Hawk Kites…

…but not as much as I love my family. 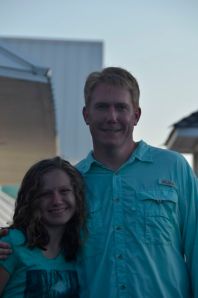 I’m pretty sure they love me, too. 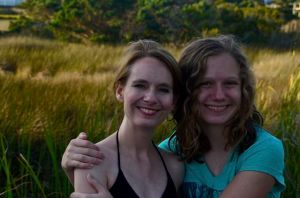 One of the quaint things about this end of the Outer Banks is its remoteness.  We had no WiFi in our cottage.  There were zero fast food restaurants and stop lights (except at the ferry, but that one didn’t count because it was literally at the end of the road.)  The closest “mainstream” grocery store (a Food Lion) was about forty-five minutes away, so we shopped at a local grocer and fruit stand instead. 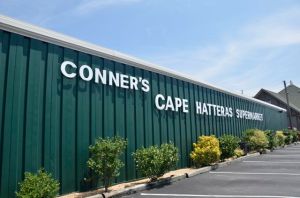 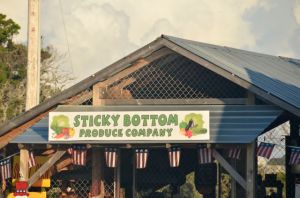 When it rained, we found a cute bookstore housed in an old house up the road in Frisco.  They carried many books by local authors as well as other well stocked titles.  I was surprised at the generous selection! 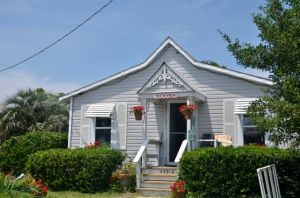 We heard from the locals that traffic back to the mainland backed up on Saturdays…so instead of sitting for another eight hours, we said goodbye to Hatteras at 5:30am Eastern time and sped our way back to civilization.  We arrived in the Norfolk area three hours later and meandered our way to the Virginia Aquarium to kill time in air conditioned comfort. 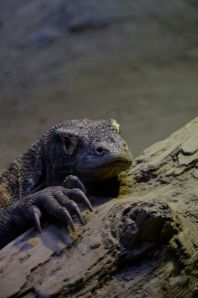 We played Peek-A-Boo with a Komodo Dragon.  I’m happy to report that he stayed in his glassed-in enclosure and am thankful my 300mm lens got this close up safely outside. 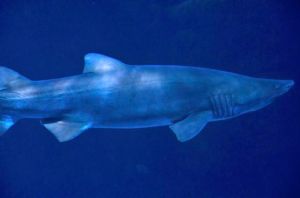 The sharks sailed the blue seas.  The blue cast to this photo accurately reflects the scene inside the shark tank. Dark blues everywhere.  I was very pleased that the sharks stayed in their tank, especially when I glimpsed these teeth: 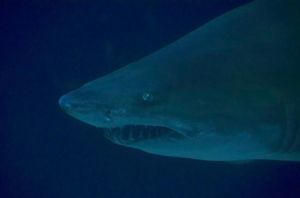 We could not leave Virginia without first visiting Virginia Beach. The Atlantic sang to my daughter like a siren’s song. 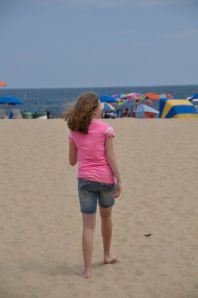 On her way back from the water’s edge, she took one more glimpse… 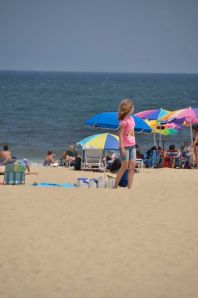 …and then we flew off into the sunset. 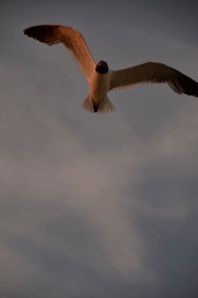 We are now bleary eyed and in need of a vacation from all our vacationing. We were tempted to just send for the dogs and move to Hatteras, permanently, but there is no ice rink in a zillion miles…so we came home instead.

I’m pleased to announce that I have a new appreciation for my super-soft Sleep Number bed (Number 15).  My head hit the pillow last night, and that was all she wrote.

Many thanks to my honey for providing this vacation for us, to the Lord for equipping me with courage and humor to endure the travel nightmares, to my husband’s family for welcoming me with such gusto, and again to God who made such a place as Hatteras, NC for true getaway refreshment.

2 thoughts on “Journey To The Outer Banks”